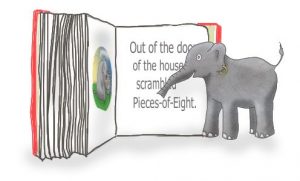 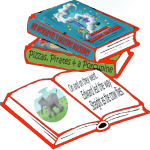 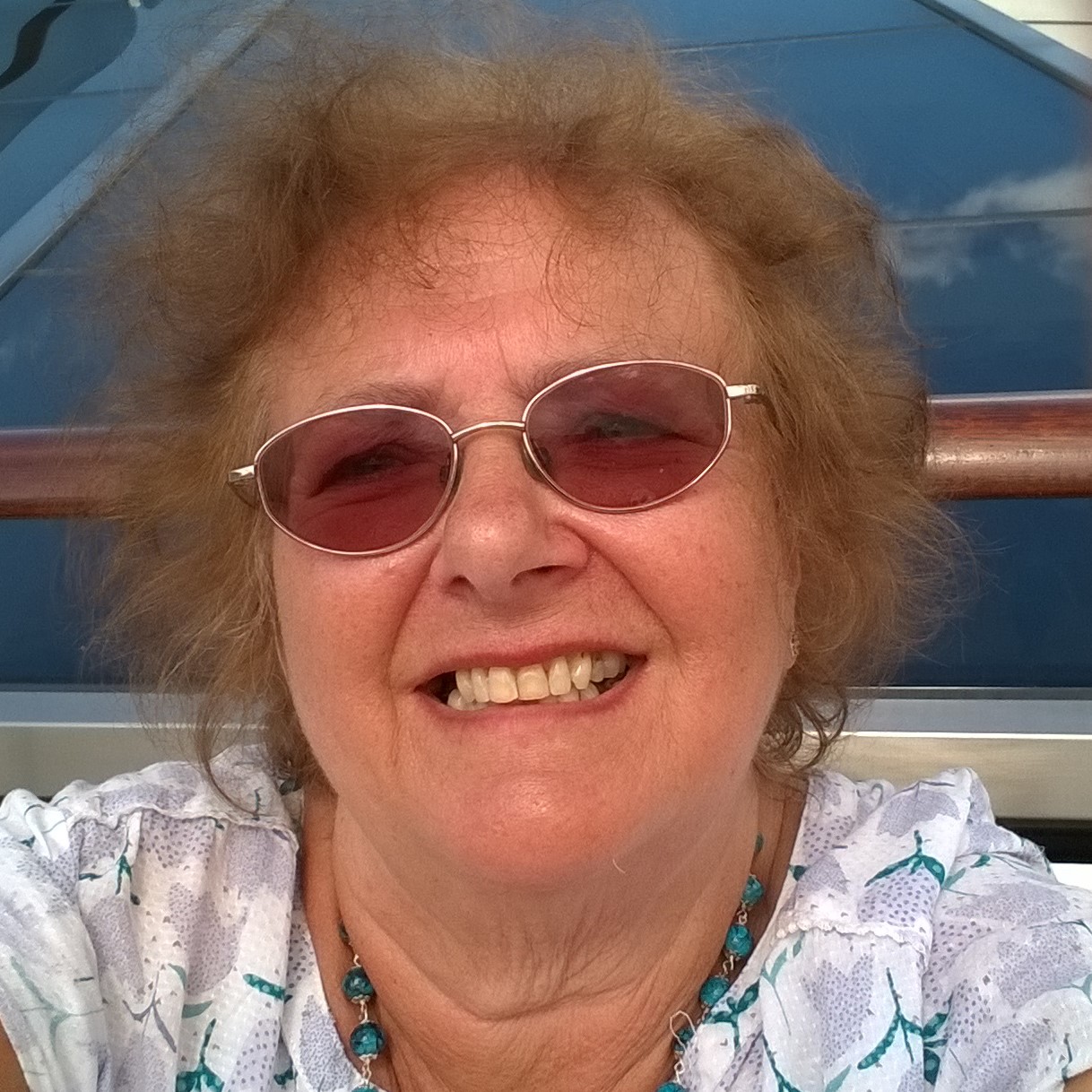 This is me, Barbara Godwin, this year, on board a ship, cruising to Norway – the land of Vikings, forklore and Trolls  ( expect troll-like characters in the future.) It was a special holiday for one of the big “0s” – not going to say which – but I admit to getting on a bit!

I love quirky characters – skeletons, mischievous ghosts, wacky machines, pantomime people, inventors,  alligators, aliens, insects, pirates, people who live in disused railway carriages, or windmills or tree-houses – anyone or anything that adds a bit of magic and makes my imagination whirl!

Here are the three very polite but rattly skeletons from The Ghostly Ghastly series. I had them in mind for at least 20 years before I wrote them into a story. The skeletons notice very ordinary things and get excited about them – the squeaky floorboard, the way the crack in the window makes the light sparkle through. I think it is because they were shut in a cupboard for years before the little Ghastlys rescued them. 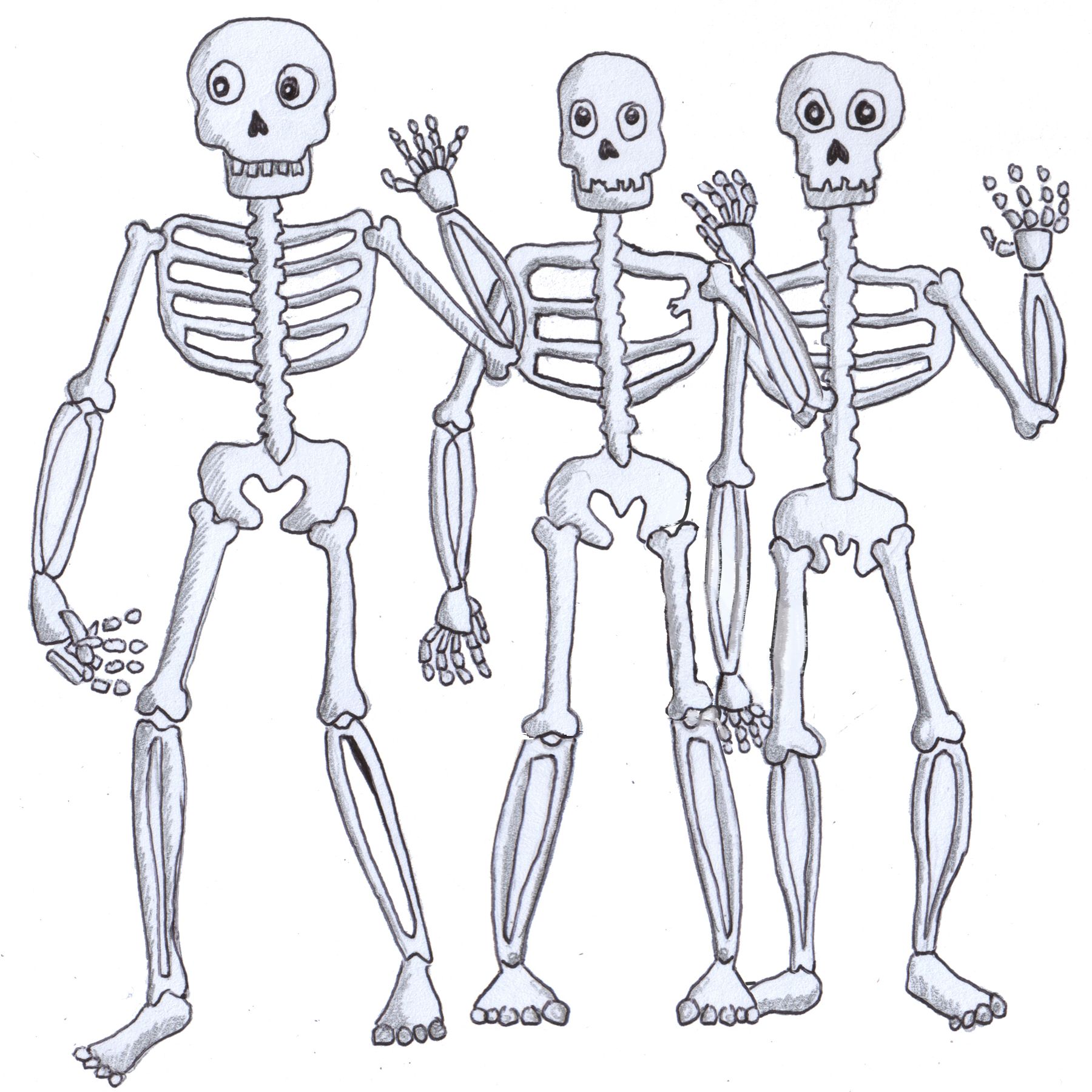 Below are Mr McMarvel, the inventor, and Rupert, his robot, from Mr McMarvel’s Amazing Machines. Mr McMarvel makes machines for the townspeople in his workshop and some of his inventions have become buzzy and lively, with minds of their own. It was great fun to think up crazy machines like the Grunts-Squeaks-and-Scary-Noises Machine and the Bouncing-Nutty-Locator. 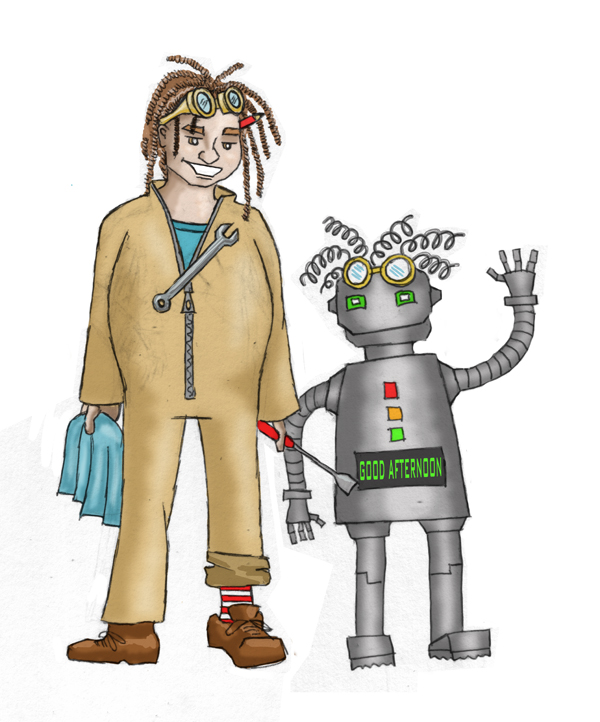 The three little Ghastlys  are  mischievous – but they sometimes get things right. I don’t remember now how I thought them up, only that I wanted three pranksters who were good at heart. 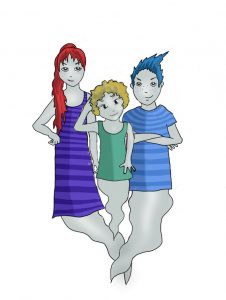 When I was Little

When I was little, running around our big back garden on the Isle Of Wight, in the south of England, I wanted to be in Robin Hood’s band or go on adventures like Alices’s. People in books were funny, scary, sad or warm-hearted, mysterious or magical. They felt real and I made up my own stories before I could write.

I still write them for that little girl who went adventuring in the  garden. I’ve never truly grown up.

I always wanted to be a children’s writer, but I had a long career in business first . Now I have the time. I’ve done several courses, including obtaining an MA in Writing for Children (with distinction) at Winchester University. I’ve met lots of writers, editors and artists who have commented on my work and given advice.

Most  of my stories have been illustrated by the amazing artist, Christina Boon, but  she has now had a career change, so I am starting to illustrate myself. I doubt that I will ever be as good as Christina, but I am giving this a really good go  – and loving it!

There are lots and lots more stories to come.

Here’s me when I was 4 years old and my family had just moved to Ryde, on the Isle of Wight. I remember that teddy well!

Here’s the old Victorian house we lived in. It was full of nooks and hidey holes, and many outbuildings.

My dad’s shed was jam-packed with tools and battered worktops, half-made shoes, bits of all sorts and smelling of metal and putty. It was an inspiration for Mr McMarvel’s workshop.

Then there was the coalhouse,  in deep and total blackness when the door was closed. It smelt of coal tar and had a safe warm feeling. The skeletons in The Ghostly Ghastly series have been rescued from a dark cupboard.

The house is still there, but no longer so gothic looking as in my time. My bedroom was the narrow one directly under the tower.

I  never went up into the tower, which was reached by a hatch  door in the ceiling of my room. My dad told me that you could see out in all four directions as there were windows on all sides – but you had to balance on the edges because there was no floor – only the door of the hatch.

I was a bit of a scaredy cat, but now I wish I’d climbed up there.

Pets and Other Animals

Lots of animals creep into my stories and they’re always fun and magical to have around.

This budgie gets lost in The Ghostly Ghastlys Book 7 (coming soon) Being picked up by ghosts could be a bit scary. He is frightened when the little Ghastlys rescue him.

Here’s a pirate cat that Christina created for Pizzas, Pirates and a Porcupine.  He is also the inspiration for Poggle, the Pirate’s Cat illustrations that I am working on  now(amongst others.) Poggle lives on a space pirate ship. There’s a lot of mice on board too – but as Poggle has a wooden leg, they always hear him coming – and flee.

I will be publishing it later.

This is the rabbit family in Eggs, Pegs and an Elephant. The parents are very grumpy but the little ones are fun.

We used to have a budgie called Ringo,  a cat called Issy, a rabbit called Flipper and lots of chickens.

My favourite chicken was called Primrose. She was pecked and bullied by the other hens: Blossom and Bluebell.

I used to take Primrose, under my arm into the greenhouse to be safe, but the poor thing would soon be gasping because it was hot in there.

Here’s Pegs, the tatty and scatty chicken in Eggs, Pegs and an Elephant.  She turns out not to be so scatty after all – and an amazing friend to have!

We have a dog called Trixie now – and she is very full of tricks!

Watch out for more animals in my stories – I have one about The Dragon on the Isle of Wight, another about Cats, Thick and Thin, and of course, an always favourite, bears – as in T Bears and the Moon.  I will be illustrating and publishing them later.

Here’s Agatha, the little dog who comes in the next Ghostly Ghastly stories, starting with Book 7, New Year’s Day. 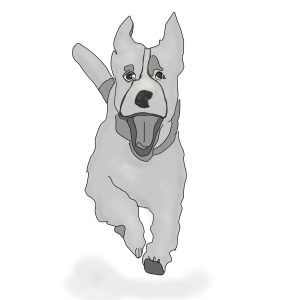 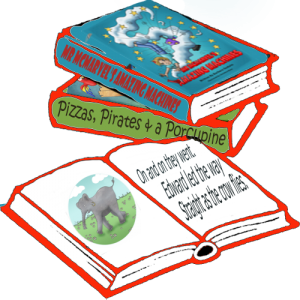 I am currently working on the illustrations for a story called Poggle, the Pirate’s Cat, as well as The Ghostly Ghastlys Book 7, New Year’s Day and also updating Mr McMarvel’s Amazing Machines with more coloured illustrations.

Lots more in the planning stages, including five new Ghostly Ghastly stories,  a combined paperback for the first six stories, and a new Christmas story. 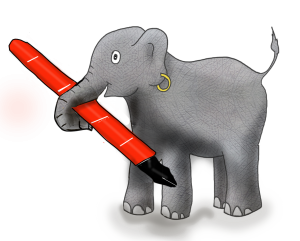 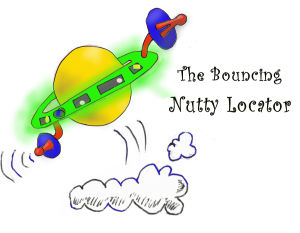